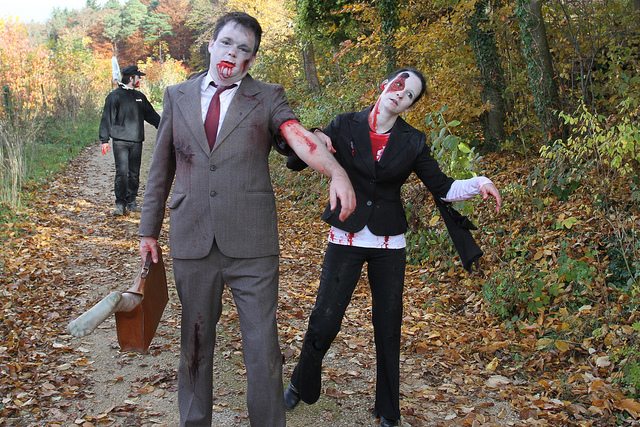 Scenes featuring zombies shuffling around a shopping mall in Dawn of the Dead,
a film made in 1978, were intended as a statement on consumerism. The same image might represent something very different today; not so much a comment on humanity?s lost values but the changing face of the marketplace. Now, it is the retailers themselves that are the zombies stumbling around a world they no longer recognise.

In the last three months, household names such as Comet, HMV and Jessops (and many more besides) have been forced into administration. What is most remarkable about this wave of destruction on the UK high street is not that it has struck at what is traditionally a high point in the retail calendar, nor that it hit so many at the same time. What is surprising is that it took so long. Data from the Office for National Statistics (ONS) reveal that spending by private households, which accounts for 63 per cent of British GDP, is weak, even by the standards of previous recessions. Moreover, bricks-and-mortar stores have been forced to adjust to the migration of consumers to cheaper online outfits. Only now, five years into a financial crisis, is the strain really starting to show.

This process of drawn-out decay is by no means unique to retailers. According to Jon Moulton, chairman of Better Capital, the rate of corporate failure in the UK is half that of the 1990s, when the economy was booming. Government policy and commercial pusillanimity have combined to create a zombie horde of businesses that cling to life but have no prospects. Figures from the insolvency industry trade body R3 indicate that one in ten UK companies (a total of 160,000) is able to pay the interest on their debts but not the principal, an increase of ten per cent in the past five months alone. Almost half of these businesses (70,000) are struggling to service their interest payments, the definition of a zombie company. Over the course of the last 20 years, the average interest rate was seven per cent, according to Moulton. But in the last four years, there has barely been one at all. This loose monetary policy has kept companies alive that in normal circumstances would have defaulted on loans and been restructured or allowed to fail. It?s not just the state that has conspired to delay the inevitable; banks have also played their part. Terrified of crystallising losses, lenders have given just enough to ensure the survival of the weakest, but not sufficient for it to be of any use. This is a curiously European phenomenon. In the US, insolvency rates have shot up in recent years, as well they might in a difficult environment. The same has not happened here. According to debt collector Creditreform, there were 174,917 insolvencies across Western Europe in 2011, a modest increase on 174,463 the year before. The three countries with the lowest rates in 2011 were Greece, Spain and Italy ? the worst-performing economies in the region. Past recessions paint a different picture. In the early 1990s, GDP in the EU shrank by less than one per cent, but the default rate for sub-investment-grade debt reached a high of 67 per cent. In today?s far worse economic situation, the default rate has not gone above nine per cent. To get an idea of the scale of the problem, PwC calculates that European lenders have ?2.5tn worth of loans that need to be exited in the coming decade, of which ?1tn are likely to be non-performing. Last year, banks offloaded loan books amounting to ?65bn ? a record amount, but still a drop in the ocean.

The zombie scourge is a matter of delicate monetary policy-making. Too loose and the hordes are unleashed, but too tight and companies in temporary difficulties are threatened, potentially exacerbating a downturn. So far it is the latter that has been emphasised. Here is Spencer Dale, the Bank of England?s chief economist, talking about the low rate of corporate failure at the start of the year: ?The whole point of monetary loosening at the moment [is] to keep companies who have a viable long-term future in business while demand is temporarily weak? So I don?t think this is particularly alarming.? Indeed, on one level, the policy is working. Insolvencies are low and so too is unemployment. There have never been as many people employed in this country as there are today. But at what cost? One of the central tenets of capitalism, that failed businesses make way for more profitable endeavours, is being rewritten. What, one wonders, is the opportunity cost of pouring resources into doomed enterprises? ?As time goes on something interesting starts to happen, just as it did in Japan,? says Moulton. ?Eventually companies with very low returns on equity start to get funding. Not only do you see a class of companies that should be killed, you start creating a class of companies that should never have been born.? Low growth becomes entrenched, but capital needs to be deployed so it goes to whoever is around. No matter what carrot or stick is proffered, UK banks continue to fall below their lending targets for SMEs. There are two possibilities. Either banks are refusing to invest or there simply aren?t enough opportunities. Contrary to what many believe, this is a demand-side problem. It is companies that are turning down loans because they are being conditioned to believe that capital should be cheap, says Nick Fenn, a partner at Beechbrook Capital. Desperate to put money to work, banks are being forced to make ever larger compromises over the suitability of loan applicants.

The death of productivity

Government policies have exacerbated the UK?s productivity problem. This has always been something of a concern, often attributed to a lack of investment in training and a culture of short-termism. In recent years, it has worsened. A woeful economic record combined with high employment has created a drag on output per worker of 12 per cent compared with the same stage in previous recessions, according to the ONS. That shortfall is equivalent to the loss of the entire British manufacturing sector. Tied up in companies that are barely alive, the already lacklustre productivity of the UK workforce is falling. Is it time the zombies were rooted out and allowed to die? It may only be then that the healing process can begin. This is an extract from James Harris’s original article in the March 21 edition of Real Deals, Europe’s leading private equity magazine.