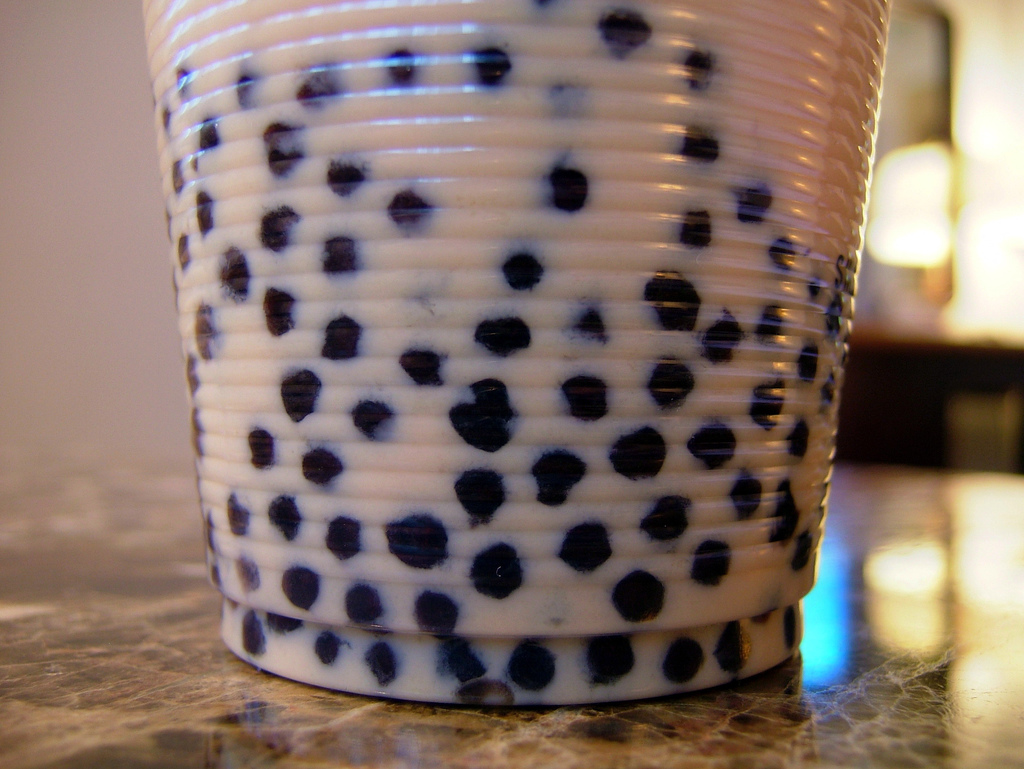 At least, it looked something like that. It was in New York City that Khan – while working at JP Morgan – set about building bubble tea chain Bubblelogy to bring bubble tea from south-east Asian to Europe and most recently, to the US.

In case you’re not familiar with Bubble Tea, it’s a milky tea-based drink originating from Taiwan. The ‘bubble’ in the name denotes the pieces of round tapioca balls lying at the bottom of the glass, which the Chinese call Zhenzhu or ‘pearls’. Pearls certainly is a more attractive name for them than ’round tapioca balls.’ I can’t say, however, that I’m speaking as an impartial journalist: I love the drink. Friends I’ve introduced it to, though, weren’t as much a fan as myself –  including some Japanese, despite the drink being popular there. They take one look the ominous bouncing bubbles and squeamishly turn away… Well, obviously not all of them. Bubbleology, the leading chain in Britain, has 40 stores around Europe right now, with 70 set to open before the end of the year. Part of this success has been timing: we live in an era which is more open-minded when it comes to beverages.  When Bubbleology launched – 2011 – it was a few years after Starbucks and its competitors started had made popular their ‘Frappuccinos,’ (a term trademarked by Starbucks and in fact a recognised Italian drink). This experimentation in beverages cleared the path for more exotic drinks – like bubble tea. Khan says, however, that he has consistently found a returning segment in the young. Bubblelogy’s largest market has proven to be teenage girls: 70% of sales are females aged 16 to 24 (much to my chagrin).  “Maybe they are more adventurous and like to be connected to the next trend or idea,” Khan posits. “I think part of the appeal is that many teenage girls don’t want to hang out in coffee shops, as it’s where their parents go, and pubs have no appeal to them.” He then says: “It was female college students in the 1980s that made Starbucks the global mega brand it is now, so you can imagine that we are very happy to have them as the core of our customer base.” Bubbleology brand and flavours seem to tick all the right boxes for this group: they’re colourful and idiosyncratic; they feature popular but unusual flavours like Passion-fruit, Banoffee Pie and Strawberries and Cream; and they have aligned themselves with retail stores that also particularly cater to young girls, like Topshop, Harvey Nichols and Westfield. However it wasn’t always a success waiting to happen: Khan struggled for a long time to find an investor. In fact, he intially bought a Kebab store in Soho, with the idea that he’d convert it into his first Bubble Tea store. However, due to financial trouble, he was forced to maintain the store as it was and sell kebabs.  It was only through luck that he was able to get the capital he needed. During a rainy day in London, a few people couldn’t attend an angels networking event and Khan was given a last-minute invite to attend. Given a natural acumen for marketing himself – obvious during our interview – he inspired an investor and began the road which has currently lead him to around 100 per cent year-on-year growth. Khan is now flying back and forth over the Atlantic, readying himself for a launch in the US. “We don’t want to experience the same problems that British brands like Tesco and Pret a Manger experienced when launching in the US. So we have spent a great deal of time researching and understanding the market place. Having on the ground knowledge and understanding (especially when it comes to locations) is really key.” He hopes that the US teen market will react the same the UK one did – he’s in a better position than he was during his UK launch: having established demand for this bizarre product with his successes here. And it was a risk, even though bubble tea has been popular in east Asia since the 80s, the culinary differences between East and West is well-known. Khan has shown, however, that with motivation and courage it’s possible to succeed despite the initial problems, and find your niche: teenage girls and the occasional journalist. Image source