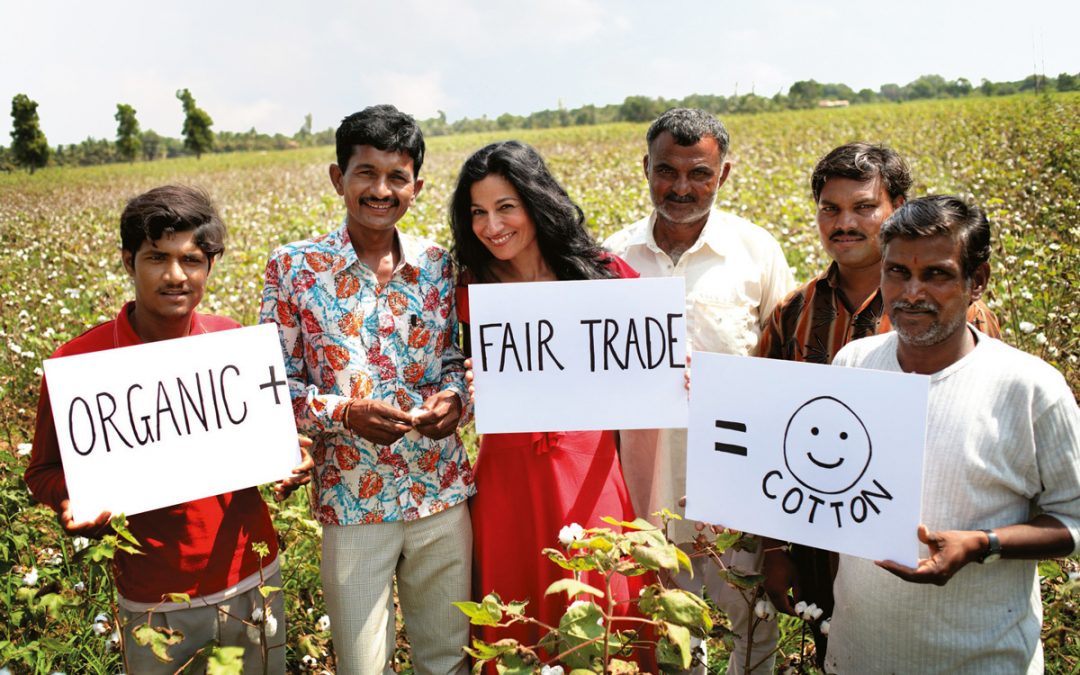 Share via
“You must respect the producer and respect the environment,” says social entrepreneur, Safia Minney to a group of fashion fanatics and business owners at an exclusive talk in West London. She delivers her opening speech clothed in an entirely sustainable outfit including organic alpaca wool knitted jumper and hand made jeans.

The harmful effects of ‘fast fashion’

As she talks about the harrowing costs that the fashion industry has on both the planet and exploited employees, it’s hard not to feel the rippling aura of guilt as attendees are reminded that the garments they’re sporting have played a role in modern slavery and pollution. Her fashion brand, People Tree, was one of the first apparel lines that offered goods that were strictly fair trade and produced by rural communities in South Asia. She’s since stepped down as director to work on a new passion project. Inspired by the Extinction Rebellion, she’s founded a network called Business Declares that helps big conglomerates alter to practises that prioritise the climate as opposed to profit. Real Business, (RB): What’s the story behind People Tree?? Safia Minney, (SM): I started up a voluntary organisation called Global village 28 years ago in Japan which offered people information on how they could live more sustainably. However, I soon realised that there were limited benefits. In order to change lives, I had to provide a solution as well as information.?So I went about building up a supply chain to build a Fairtrade sustainable fashion brand. At the time in Japan, there was undoubtedly a gap in the market, while basics such as ethically sourced sugar existed, there was little being done in the fashion world to help aid this crisis of exploitation.? So People Tree came from there. RB: How does it differ from the big brands?? SM: The major capitalistic fashion brands are built on modern-day slavery. They employee people who are trapped and desperate. I went to visit some of the garment factory workers and I was horrified. They would sit in a room no bigger than a bathroom, with eight people forced to share a single bed in a rotary fashion. It was a desperate situation. What we do is offer garment making as a way out of poverty, not a situation that propels you further into it. RB: Sounds great, so how do you aid them?? SM: We let these people use their traditional skills. So not only does this let us create original pieces, but it also provides our workers with the opportunity to receive a political and economic voice. They are allowed to make a fair wage which in turn lets them educate their children and utilise the natural resources. Even more important to me is the financial stability it gives them which allows them to gain to exercise their rights. For example, if a major clothing brand comes and tries to take the land, they can campaign against it. Ultimately it was about giving people power. We did the same with our buyers, taking them out to Bangladesh to see where the goods are being sourced from. Creating transparency was a crucial aspect to be sewn into our company’s ethical fabric. RB: You’ve worked with some big celebrity names like Emma Watson, what was that like? SM: Amazing, at the time she was 19 and reached out herself to make a collaboration that would appeal to a younger demographic. She herself went out to visit the clothing makers in Asia. That was almost 10 years ago and I feel like it brought ‘eco-clothing’ to a more mainstream place. RB: Seems like you were growing quite an empire with People Tree, why did you step down?? SM: I had not intended to resign, but I had a strong pull to do something “higher”. We need enforcement on ethical consuming so I put together Business Declares for companies who are passionate about pollution and how to share best practice within their sectors. It boasts some big names including the CEO of the body shop. It also offers resources to companies on how to alter how they operate in a more ethically conscious way. This includes everything from buying to human resources. Businesses need to change the dialect in which they refer to this environmental issue. What we are witnessing is not climate change, but crisis.