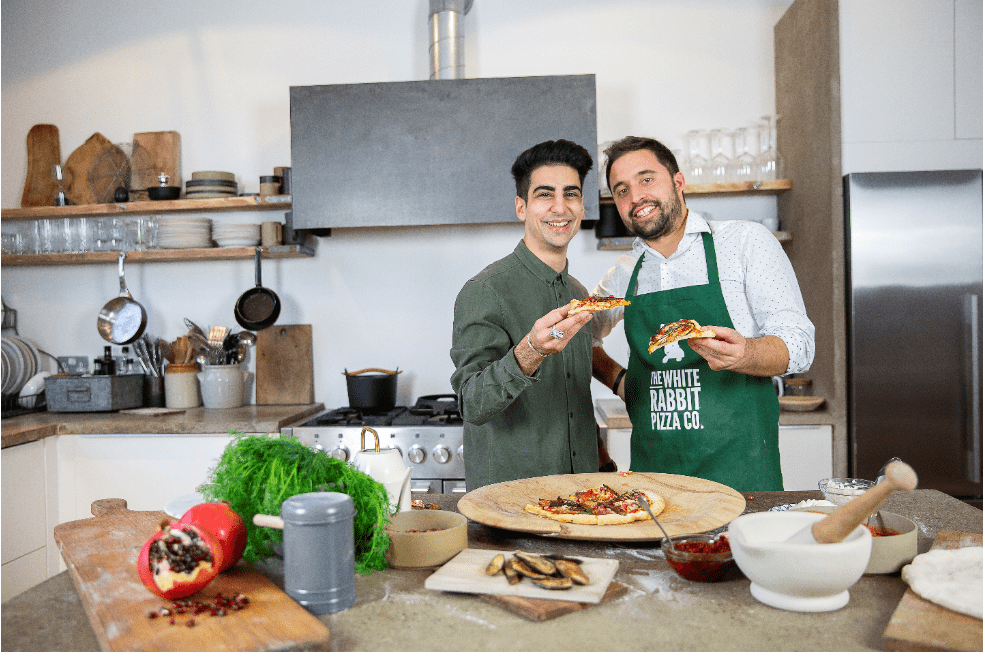 Share via
If you wandered into any restaurant or supermarket (before the coronavirus crisis of course), you would see endless options for health-conscious customers who favour a lifestyle free from gluten and dairy. It’s a trend that big companies have keenly capitalised on, who can forget Greggs’s glorious win with the meat-free ?steak bake? last year, which saw the pastries chain generate a stealthy 27% rise in pre-tax profits. Even back in 2018, the UK launched the most vegan produce than any other country.? So if you are a keen entrepreneur eager to enter the food industry, it would probably be best to favour plants over poultry in order to rack in a hefty profit.? If you’re looking for proof, search no further than Italian/British business duo, Matteo Ferrari and Nick Croft-Simon, co-founders of the multi-million brand?White Rabbit Pizza. Today, they are selling their fresh-from-the-fridge pizzas in over 750 UK stores and revenues are expected to hit ?3.5M for the year ahead.?Real Business sits down with the pair to hear their recipe for success… Real Business (RB): Why the pizza industry??

Matteo Ferrari?(TF):?I?ve been involved with pizza since I was young! I?m originally from Bergamo in Northern Italy and had worked in my uncle?s pizzeria most of my life. I later moved to the UK and became head chef at ?The White Rabbit? pub in Oxford city centre, I took over the menu and got to work making loads of pizzas. At the pub, I met Nick, who was a bartender and we started the journey to ?The White Rabbit Pizza Co?.?We both noticed that there were loads of customers coming in asking for free-from pizzas and that?s where we had the idea that something was missing from the supermarket shelves.

RB: A growing number of young millennials are eager to become entrepreneurs, what’s your advice for them?? NicK Croft-Simon (NS):?Be a sponge! There are some things in business you can only learn through experience, and people who have been there and done it are a short cut to that experience. Take every coffee, phone call, etc, you can; take advantage of the fact that people inherently love giving advice. If?you have started a successful business, chances are you have gone through a lot of pain and problem solving to get there, reliving this journey and offering insight gives you a great sense of pride and fulfilment. You aren’t being a nuisance, you’re stroking their ego, so don’t be afraid to ask! RB: How did you get brands like Waitrose or Sainsbury?s to recognise you?? NS: We actually got very lucky with Sainsbury?s, they approached us! But ultimately, that?s because of all of the hard work we?d put in beforehand. We?d been listed in smaller retailers, like Abel & Cole, Ocado, Whole Foods, etc and had started to build a reputation in these retailers and with shoppers for being delicious pizzas. ?We also started to collect a number of awards from Lunch!, Great Taste and FreeFrom Food. So by putting in the hard work on making great pizzas, getting the word out through loads of samplings in these smaller retailers, we?d begun to build a name for ourselves among free-from shoppers and that?s when Sainsbury?s approached us in 2017. ?With Waitrose, we reached out to them but the timing was perfect as they were putting a huge focus behind plant-based ranges.? RB: Any tips for smaller brands who want to be stocked in major supermarkets? TF:?Often with these big retailers, you?re going to need to approach them and have a really clear case on what you bring to the market and their shoppers. They?re also going to want to see you?ve been successful with shoppers in the smaller, independent retailers. Making sure you?re really consumer-focused and have developed and engineered your product to meet a clear demand is key and will ultimately help you to build relationships with the bigger retailers.? RB: Would the business be as successful if you had not capitalised on the growing trend of “vegan” and “gluten-free” food? TF: The idea of our brand was to disrupt and modernise what we thought was quite a stagnant pizza fixture, but we knew that to have any chance, we needed to focus on serving unmet consumer needs, it was the best route to becoming the challenger brand we wanted to be.?The category is dominated by very big players and I think if we?re honest, without delivering an unmet need, we would?ve been crushed fairly quickly had we tried to enter the space.? RB: What do you think the biggest challenge is for first-time business owners?? NS: Stress! For years I struggled to reconcile the fact that the thing that brought me the most joy in my life also brought me, by far, the most misery. For every year we survived, I was no less stressed than I was at the very beginning. The moment I embraced the constant, terrifying fear of failure and began to see it for what it was,I felt a huge weight lifted from my shoulders. The day-to-day stress and angst is still there, but my relationship with that stress is totally different. RB: What has been a business high, and business low for you?? TF: We are very people-oriented and our biggest lows and highs are reflective of that. Our deepest lows, if we?re honest, have always come from trying to mix business with friendship. They were undoubtedly the most difficult obstacles that we?ve had to overcome. Thankfully, it did no lasting damage to our relationships with these friends, but that didn?t make it any less painful at the time. Similarly, the biggest high we feel is when we look around and see a flourishing team of people who care about our business as much as we do. There is no greater feeling of fulfilment than that, and we try to remind ourselves of it every single time we step into the office. .?