The North London rival of Arsenal is having an entirely new stadium built around the existing one, working alongside design firm Populous, which will almost double capacity from 35,000 to 61,000.

Indeed, Tottenham Hotspur FC is very much focused on making the new venue, which will open in August 2018, “a better stadium for everyone”. That means more revenue opportunities for the club and experiences for customers, as the new venue will host NFL games, concerts and more.

With an audience of around 45,000 that will be able to attend gigs, Tottenham Hotspur FC is out to position itself as a middle ground between the O2 (20,000 capacity) and Wembley Stadium (90,000 capacity).

Our visit took us to Lilywhite House, where the corporate affairs of Tottenham Hotspur FC are managed. We heard how two steps were important ahead of the stadium’s development.

This first thing was recognising that football is the core of the business, never forgetting that the squad should be a primary investment area.

To that end, it can can be likened to the Google of the sporting world. Use of magnolia trees to avoid sap from dripping onto cars, junior players are made aware of how their career can progress as they develop, and herbs are grown on campus to meet dietary needs.

Having been at the club on and off for two decades, Cullen has seen a lot happen at Tottenham Hotspur FC. A member of the board, she thinks the fact it’s small gives the business flexibility, joined by just the chairman, finance director and football operations director.

Talking with Real Business, Cullen said: “All of our agendas fit into the stadium project. One challenge is ensuring we give enough time to secure proper footing the club needs to run well, so we can still drive it, grow and engage with the fan base. And at the same time, deliver this fantastic and hugely popular stadium project.

“I’ve worked very hard on the planning side of it to make sure planning gets permission, to see what we deliver here works for residents and key stakeholders. During construction, we are working with the local community. We have a lot of committees and regularly engage with them.”

Meanwhile, hospitality director Andy O’Sullivan has been with Tottenham Hotspur FC for four years. He joined to enhance the board’s vision, factoring in how premium and general admittance needs can be met across catering and beverages.

“In some stadiums, there’s quite a big differentiation between the public and premium experience,” he said. “What we try to do is have a gradual growth plan to let people think about what area they want to be in. To change the perception of what a public fan can get and what a corporate fan is.”

O’Sullivan has travelled “extensively” for inspiration to see what works and what doesn’t, while conferring with Tottenham Hotspur FC fans for detailed market research to gain their needs.

Cullen said: “In our fan base, we have a trend towards highly successful entrepreneurial individuals, who run small growth and startup businesses. When we do the categories of fans for research, there’s a really high percentage of business owners.”

She detailed that some fans just want to watch football with friends and have a premium experience, but said many want to use the sport for a business networking opportunity.

“It’s tailoring to suit the SME market and that owner-MD who says ‘I want to entertain four or eight people every week, but I want privacy with the fun restaurant ambience’. In terms of the suite market, we think this fits the need where there is a gap.”

In addition to supporting needs of SME clients, collaboration with local businesses – or local heroes as the club calls them – in a partnered supply chain capacity is also key.

O’Sullivan revealed the current stadium already has local heroes supplying produce, while there are ongoing discussions around an “extensive catering tender”.

“It’s about how you bring that Tottenham High Street feel inside the stadium, how you create produce, food and beverage that’s bought and sourced from those local economies,” he elaborated.

“So if we’re spending money, it’s put back into the local community and businesses, so that’s key for us. But also, they’ll deliver a produce fit for this area and it’s what our fans want to eat and drink.”

Cullen added that partners have supplied things such as cheese and beer, but also noted help is at hand in terms of administration. This has seen Tottenham Hotspur FC guide the local businesses around licences, processes and standards that need to be met, funding the paperwork rather than casting them aside for not being up to code.

On the topic of whether these companies could secure investment from the club, she noted it wouldn’t be a mainstream part of the business, but it also wouldn’t be ruled out.

“On the website, we have a section for local businesses and it won’t just be for food and drink. We’re open to all services, whether that’s security, baking or whatever, and I think that’s the right thing to do,” she said.

The club actively has people on the ground sourcing business talent too, with former captain Ledley King acting in his Tottenham Hotspur FC ambassador’s role alongside PR manager Tony Stevens to strike up new local partnerships.

While the stadium is only set to get bigger, it will actually provide opportunity for smaller companies, even the one-man band, as there will be pop-up arrangements in place across the new site.

“We’re here and have a responsibility to the local community. We’re the biggest employer and biggest economic driver,” said Cullen.

The new stadium, attractions and homes are set to create 2,500 jobs locally – some 1,700 at the club itself and 800 supported through the supply chain. But the added number of footfall will also mean almost 1,000 more jobs being created in the area to meet demand.

In terms of financials, the new stadium will translate into £293m for the local economy annually, a £166m growth, and £211m over the four years of construction.

Reflecting on the NFL deal, Cullen said it was a matter of perseverance and recommended British SMEs seeking overseas deals be patient and seize the opportunity.

Taking revenue out of the equation, what you have was a great international blend of new ideas coming to the UK, which can be just as valuable.

“When you get an amazing idea, you’ve just got to persevere,” said Cullen, who noted that talks went on for about two years. “Now we and the NFL look ahead to what is going to be a lot of fun.” 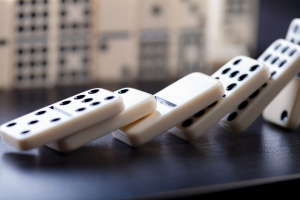