More than four million broadband customers are wasting cash on sluggish broadband speeds, even though it could be cheaper to upgrade to a superfast contract. Superfast services are now available to 95 per cent of the country.

This is according to research from USwitch.com, which reported that 32 per cent of customers on standard broadband are paying £53.40 more a year than the average fibre contract.

This happens when a customer lets their contract roll-over without seeking out the best new contracts and tariffs, so they get charged higher prices for the same product. In other words, they could be saving money by switching to a faster broadband service – it seems like a no-brainer.

Richard Neudegg, head of regulation at uSwitch.com, says: “There’s a damaging misconception that fibre broadband services are prohibitively expensive which is just not the case. While the price difference between standard broadband and entry-level fibre in-contract is modest, it’s when you compare how out-of-contract pricing for standard broadband stacks up against introductory fibre deals that is the most surprising.

“In fact, customers who are languishing on expired traditional broadband contracts could switch to a faster, more reliable, service and make considerable savings too. These discounts could be even higher if Ofcom pushes through its ruling to discount the price at which Openreach sells its network to providers – a saving which should be passed on to consumers to encourage uptake of faster and more reliable services.”

Neudegg argues that this raises the question of whether providers and the regulator should be doing more to ensure that consumers are aware of their options.

“As it stands, less than six in ten people (57 per cent) think they can get superfast speeds in their local area despite the government recently confirming that superfast broadband was available to 95 per cent of premises.

“In order to bridge this awareness divide, providers need to make their property-specific speeds data available to third parties so they can be easily presented, enabling customers to make a better informed decision about their telecoms services in their own homes.” 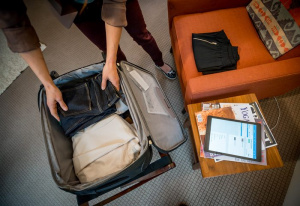 Innovations changing the travel and expense landscape for finance