A good friend of mine is my polar opposite. He is a Corbynista whereas I regard that man as a dangerous Trot. He is a passionate Remainer whereas I am an ardent Brexiteer.

He believes the upper echelons of our society, in general, does not deserve our support and is made up of far too many dodgy characters. In the past, in this latter area, I have also begged to differ but on recent evidence, I am now beginning to change my mind.

Well, let’s start with that increasingly high profile Royal, Prince Harry. Admittedly this young man is not the sharpest tool in the House of Windsor’s box so maybe we should not be entirely surprised to see him pick a public fight with anyone who displeases him.

Accordingly, he does not see the irony of, on the one hand using the media to promote his views on climate change Africa and anything else that takes his fancy, but on the other hand telling them to back off on stories about him and his wife.

Our very shrewd Queen and some of her 20th Century predecessors realised long ago that the public is only prepared to support their rather anachronistic existence at the top of the ‘Establishment tree’ if they do not go around shooting their mouths off at everyone and everything.

Are we losing patience?

In other words, someone at Buckingham Palace better tell Harry if he wants the public purse to continue to support his lifestyle he had better start showing some humility before we lose patience with him and, by default, the Royal Family.

Then we have the latest example of the Establishment in full cry, the President of the Supreme Court, Baroness Hale. We began to wonder about her fondness for publicity when she chose to wear a very large spider brooch during her summing up on Boris Johnson’s decision to prorogue Parliament for several weeks.

It’s happening in politics too…

Our worst suspicions were confirmed when last Friday she addressed a Girls’ Schools conference standing in front of large backdrop projection picture of her with the words “Spider-Woman takes down Hulk; Viewers transfixed by judge’s brooch as ruling crushes PM.” –  Why has the highest judge in the land decided it is right and proper to trumpet her judgements in public?

Getting too big for their boots?

Up until now, British judges have been scrupulously careful to adopt a low profile outside the courtroom for, quite rightly, fear of being seen to exhibit prejudice. A spokesman for Lady Hale came up with the ludicrous response that she had not been given advance warning of the presentation’s title.

If she hadn’t let her ego get in the way she would have, on seeing what she was standing next to, immediately ordered that the backdrop projection was extinguished.

Perhaps instead of choosing to tell us all what an absolutely splendid person she is she should, when she gets up every morning, say to herself “I am a little old lady who is extremely fortunate to be entrusted with the highest legal position in our society.”

150,000 stranded customers paid for by us to be flown home. 800,000 paid for holidays in ruins. Yes we’ve had the usual valid stories of greedy executives living high on the hog, while the business sinks into oblivion but hang on here comes a new one, as we discover that Thomas Cook was forced to pay, in its dying days, tens of millions of pounds of fees to more than 30 advisors.

If negative rates cause the next crisis by distorting capital allocation and encouraging unmanageable levels of debt, central bankers will discover that the real danger is to them personally.

This included more than 20 law firms and the big 4 accounting firms. Indeed the feeding frenzy was so comprehensive that potential new investors struggled to find a firm that was not already in the room or had not worked on the restructuring.

Has it not occurred to these scions of our Establishment how awful that looks? Of course not. After all, they are the masters now aren’t they?

And now to the bankers…

Unsurprisingly it presented an excellent opportunity for John McDonnell, shadow chancellor and Marxist sympathiser to get stuck in. Finally, permit me to return to those other self-justifying Establishment players, the central bankers.

Webb concludes her article with this devastatingly accurate indictment: “ Most people didn’t notice the role of the central banks in the last financial crisis.”

Loyal readers will know I have long since labelled our very own representative of this species, Mark Carney, as the most dangerous man in Britain today.

Are we headed for a truly ‘topsy turvy’ world?

As we head into the Alice in Wonderland world of negative interest rates other much more sophisticated commentators than me are beginning to realise this to be the case. I bring you the brilliantly dispassionate Merryn Somerset Webb writing in the Financial Times on the 5th October under the headline “Negative rates tarnish central bankers halos”.

As the great god QE continues to be pushed by the ECB and Carney again talks of lowering interest rates (as does Jay Powell in the US) she cites “a nasty little example of the damage they can do.”

At a conference in London last week an asset manager, Peter Spiller worked out what you would have to do if you wanted an inflation-adjusted £1 for your retirement in 2068 (49 years away).

To quote from Webb’s article “you could look to achieve this perhaps by investing in a gilt that matures then. Right now you would need to put in £2.60 for every £1 you get out.”

Because that is the compounding effect of investing for 49 years on the miserable minus 2.05% yield that the bond is offering today”. Webb concludes her article with this devastatingly accurate indictment: “ Most people didn’t notice the role of the central banks in the last financial crisis.”

Old style monetary policy was important but it was also complicated and boring-and hence more or less invisible. But negative interest rates are a different thing altogether.

While you can explain the problems they create in complicated ways, there is no need to do so. Most people intuitively feel that negative interest is somehow unnatural.

If negative rates cause the next crisis by distorting capital allocation and encouraging unmanageable levels of debt, central bankers will discover that the real danger is to them personally.

The whole idea that they are politically independent good guys will come tumbling down. Instead, ordinary people will see them as dangerous creatures who set in motion an experiment they have no way of reversing or controlling.

A false demonstration of humility?

Just like bankers in the early 2000s”. Carney & co would be wise to demonstrate humility. They should admit to us that they do not now know the consequences of what they started instead of continuing to pretend otherwise. By doing so they might just save their skins.

The common destructive thread at work here is egoism. Too much of our Establishment is dominated by those with overweening egos who appear not to have the mental courage that humility requires. If they do not find that inner quality then their destruction is inevitable.

The answer to the UK productivity slump? Fix the skills gap 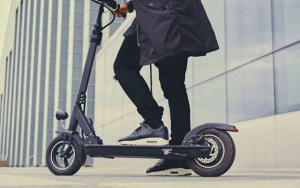 Why electric scooters aren’t smart or safe enough yet