Britain is in trouble. We see it in the stagnating housing market, with more people selling than buying. We see it in the low wage growth, while inflation is barely kept in check by summer sales. What an irony that it is a supposedly pro-business Conservative party that has led us to this low.

The resignations tell the story. November saw off Michael Fallon amid accusations of sexual harassment, closely followed by Priti Pate. She failed to mention her secret meetings with Israeli politicians. Damian Green followed in a pornography scandal and in April, Amber Rudd stood down after “misleading” MP’s over targets for deporting illegal immigrants.

We hear the findings of the Electoral Commission of the Vote Leave Campaign’s antics which have many of us agreeing with Chuka Umanna’s question: “Who do these people think they are – do they think they are above the law?”

There’s a naïve hope that MPs stand in the national interest. The London Economic website recently alleged that Jacob Rees-Mogg stands to make a huge personal financial gain from the Brexit he so vocally supports. Not that he needs it when he and his wife’s joint fortunes are expected to be worth around £150 million when his wife inherits from her mother.

Anna Soubry recently named Rees-Mogg to be the real holder of power in the government. This is a man who ironically had such a poor performance as an investment manager that between 2003 and 2007 the fund failed to meet its benchmark in four years out of five. We used to expect competency in our leaders.

If that leaves us still feeling secure, we should look at a more literal power broker. Arlene Foster, leader of the DUP, is propping up the Conservative party minority with her 10 MPs. Foster appears happy that her customs and border interests have been well cared for in prime minister Theresa May’s Chequers White Paper.

But let us look at the pedigree of who May was so happy to leap into bed with to keep her grasp on power. The founder of the DUP was Ian Paisley, whose instigation of loyalist opposition to the Catholic civil rights movement in 1960’s Northern Ireland was instrumental in the outbreak of the conflict that was to last for 30 years.

Ian Paisley Jr incidentally has now been suspended from the House of Commons after his family holidays left him in breach of Westminster rules over luxury holidays worth up to £100,000.

Old Conservative retainers look on appalled. David Davis, restrained in the Commons, hinted at gross dishonesty in the Sunday Times, pointing out that the whole paper was supposed to have been put to cabinet and never was.

Ken Clarke continues to shake his jowls in despair. He points to trouble by “a tiny handful of people, whose arguments are most certainly not in the national interest”. Yet undoubtedly it is to this small group, including Rees-Mogg, that the PM has caved to with her controversial paper.

Should business leaders look outside the Conservative party to instil confidence, they will find little consolation. Lib Dems Vince Cable and Tim Farron could not be bothered to take part in the vote. Labour, taking time out from promises to destroy the City and hand all power to the unions, are busy with anti-Semitism rows.

These are escalating since the party’s decision to use its own version of anti-Semitism rules. They have their own unsavoury suspensions – such as Graham Stringer over harassment, and the resigned John Woodcock who called Jeremy Corbyn “a clear risk to national security”.

According to Soubry, many Conservative MPs say “the loss of thousands of jobs would be worth Brexit”. She suggested, “Nobody voted Leave on the basis that somebody with a gold-plated pension and inherited wealth will take their job away from them”.

She also exclaimed that the government’s decision to accept the European Research Group amendments “complete madness.”

The reality is that May will do anything to avoid stepping down, from getting into bed with DUP, or lapping up US president Donald Trump’s insults.

The Chequers agreement and ERG amendments will never be accepted by the EU, so this whole latest storm is posturing and power playing.

Boris Johnson’s resignation speech today was heralded by many as a preliminary volley against the PM. There is undoubtedly a need for change.

Overall, his message was that we have two and a half years to get this right still and we should not be stampeded away from a strong independent, self-governing Britain.

He is right in saying we need change. But the prospect of a longer period with no resolution is simply a death sentence to the economy. It is not Brexit per se that has brought us to this point but the inept and venal people we have in power who have totally smashed the confidence of British businesses. 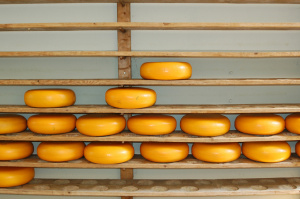 The dairy dilemma: Why cheese and butter could be luxuries post-Brexit