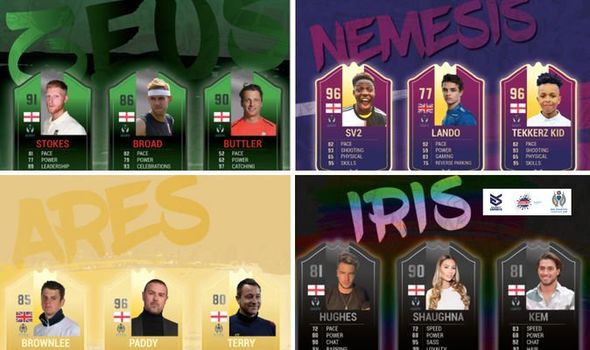 Share via
The first-ever NHS Charities Together Cup quarter-finals kicked off yesterday, with eight teams of celebrities competing in a FIFA 20 tournament to raise funds to battle coronavirus. A stellar cast launched the tournament (which streamed live on StreamCES) with ex-England football star Shaun Wright-Phillip beating female football star, Leah Williamson in a close 3-2 game. And it wasn’t just housebound athletes who got a chance to showcase their digital soccer skills, with Love Island star and FIFA newbie Shaughna Phillips taking on Instagram famous bodybuilder entrepreneur, Ulissels, in a game which saw her lose 2-0. In what was arguably the loudest game of the tournament, ex-footballer Stevo The Madman took on Love Island’s Kem Cetinay with Kem winning 3 – 1 to level the tie. The two very vocal players provided a lot of entertainment for spectators, who were able to donate to the cause as they watched. England cricket captain Joe Root called taking part in the tournament “more nerve-wracking than a cricket match”, and his opponent, Love Island’s Chris Hughes justified his nerves with a comfortable 3-1 win to send his team through in the decider. Other notable contestants included competitive cricketer Ben Stokes and Formula One racing driver Lando Norris. A full semi-finals schedule which takes place today can be found below. SEMI-FINALS SCHEDULE: 15:00 Ben Stokes v Shaun Wright-Phillips
15:20 Jos Buttler vs Fabrice Muamba
17:10 Shaughna Phillips vs SV2
17:40 Stuart Broad vs Joleon Lescott
18:10 Chris Hughes vs Lando Norris
18:40 Kem Cetinay vs Dillian Whyte The founder of the NHS Charities Together Cup, Leo Skagerlind says; “The quarter-finals of the competition kicked off yesterday (28 April) and it was exactly how I’d envisaged only a few weeks ago when the idea came to me. Competitors and viewers really got the concept and engaged just as I’d hoped. The NHS Charities Together Cup is somewhere between Celebrity Gogglebox and Soccer AM. Everyone had fun. It put a smile on our faces again. “There were some tough games; Tony Bellew only just lost to professional gamer SV2 with his army of fans, Chris Hughes provided much entertainment against cricketer Joe Root, Jonny Brownlee beat Ben Stokes and arguably the best game of the day was Lando Norris narrowly beating Dillian Whyte even with 2 red cards. Looking forward to the semi-finals (29 April) and raising more money to help make conditions better for the people holding our country together at the moment.” Viewers can donate by doing the following: Alternatively please go to celebrityesport.co.uk. All donations go directly to NHS Charities Together. Texts cost £3, £5 or £10 + 1 standard network rate charged, 97.75% to NHS Charities Together Campaign for the Covid-19 Urgent Appeal.