A new CBI report, Winning Worldwide, said a long-term, cross-government strategy, rather than short-term initiatives and campaigns was the best way for the UK to export more and be a “leading trading nation” after Brexit.

It sets out a raft of practical proposals for the Government to take to support exporters and increase the number of firms selling their goods and services overseas.

This includes appointing a “high-profile” business person as HM Chief Trade Ambassador. The CBI said the person would have “rich private sector experience in operating overseas” and who could champion the need to increase exports across government, the business community and international investors.

The CBI told Real Business that it had no individual in mind, nor had it sounded anyone out regarding potential interest. However, it stressed that it should be an official government position.

“A Chief Export Ambassador can work in the business community to raise the profile of trade, as well as being a senior figurehead for inward visits of foreign delegations,” the report stated.

“These delegations are as important as outward foreign visits in securing investment and so often the UK misses a trick where other countries would roll out the red carpet in a much more welcoming manner,” the report stated.

“Ministers understandably have many competing priorities and a senior representative of business can help in meeting the need to be proactive on the trade and investment agenda.”

The report also called on deputy heads of Mission in British Embassies to be given new responsibilities for trade and export promotion in countries across the globe. More UK trade missions should also be led overseas with a greater focus on individual sectors and countries.

“Rarely has the demand for Brand Britain been so high. From cars to consultancies, and fashion to FinTech, the quality and instant recognisability of UK plc products and services is a tremendous national asset,” said Ben Digby, CBI International Director.

“We have a fantastic base on which to build a lasting and durable exports strategy that will ultimately lead to many more of our world class companies selling their goods and services around the globe.

“And all at the very moment the UK is busy looking to deepen trade ties in every corner of the globe, post-Brexit.”

The CBI also called for an analysis of freight movement to ensure the UK’s transport network is future-proofed for the movement of goods.

Businesses could also take an important role by identifying opportunities for British suppliers within their supply chains, and to be “champions for exporting by supporting smaller firms, practically and by sharing their expertise, in taking their first exporting steps”. 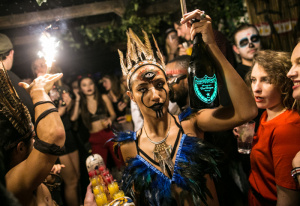 “Our doors are open for everyone”: Tapas and tequila are the stars at Tonteria