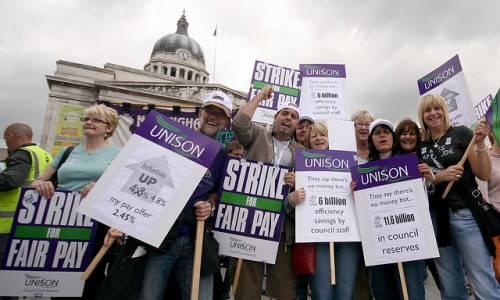 Government plans to implement new strike ballot laws were set out in the Queens speech in May 2015, whereby it was suggested that the Trade Union Bill would pursue our ambition to become the most prosperous major economy in the world by 2030 and ensure hardworking people are not disrupted by little-supported strike action .

This new piece of legislation, it was said, would place more requirements on unions and make the prospect of industrial action less likely ” it was put forward by the government in response to the rising number of strikes, as well as concern over the effect the number of working days lost to strikes has on the economy. And now the Bill has officially transformed into the Trade Union Act.  Yet while the main parts of the legislation have remained intact after ten months of struggle between MPs, the concessions altered its initial version when it was presented to parliament in July 2015. Read more about strikes: For example, measures suggesting employers could gain detailed plans for pickets and social media campaigns two weeks in advance, have been dropped. At the forefront of its offering, business leaders need to take note that it will introduce a 50 per cent threshold for ballot turnout and an additional threshold of 40 per cent of support to take industrial action from all members eligible to vote across the health, education, transport, energy, border security and fire sectors.  And under the act, more powers will be granted to the Certification Officer to ensure new and existing rules will be followed by the more than likely angry unions. To further increase transparency, it will require a clearer description of the trade dispute and the planned industrial action on the ballot paper, as well as the creation of a clearer process for trade union subscriptions that would allow new members to make an active choice of paying into political funds. The law now also maintains that a four month time limit for taking industrial action after a ballot be upheld. This comes in response to a national teacher’s strike in 2014 that relied on two-year-old ballot, with a turnout of 27 per cent. Of course before being made law, the then Bill faced much criticism. This is in part due to the fact the government has effectively made it more difficult for a union to obtain support for a strike, as well as there so far being no provision for electronic voting. Against its wishes though, the act will require the government to conduct an independent review of electronic balloting for strike ballots. However, there is no legal commitment to its introduction. Given the tube strikes we’ve faced as of late, its easy to see how industrial action can affect a business. Here’s how to deal with it in the most effective way possible. By Shan Schutte