Skip to content
Choosing Suppliers
Share via
November 2016 saw?the National Infrastructure Commission?(NIC) rank countries across the globe based on 4G coverage, with?the UK coming in£54th place. The latest?research now suggests there’s a big divide inBritish cities as well. The NIC?reported that the UK was filled with “digital deserts“. Its chairman, Andrew Adonis, even claimed: “The typical user can only access 4G barely half the time. Our 4G coverage is worse than that of Romania, Albania and Peru, and city centres are plagued by not spots where connectivity is impossible. While enthusing that the UK would rise in the 4G coverage ranks this year, Which” further emphasised Adonis’ point, revealing the difference in mobile experience across Britain. Relying on OpenSignal figures?” the company?took data readings from over 30,000 users Which compared the UK’s 20 biggest cities in terms of 4G coverage. Namely, availability and speed. Those in Middlesbrough will be happy to know they have the most access to 4G, with an availability of 83 per cent. Bournemouth, on the other hand, ranked last. London came 16th in the table, just below Coventry and Stoke on-Trent. London also didn?t make it far in the’speed ranking, coming in 16th place again. Stoke-on-Trent took the crown at 26.6 per cent, while Brighton and Hove came at the bottom with 17.6 per cent. Leicester was the only city to”feature in the top four in?both tables, though Liverpool wasn?t far behind it ranked’sixth”for availability and fourth for speed. Here are the rankings for both availability and speed: 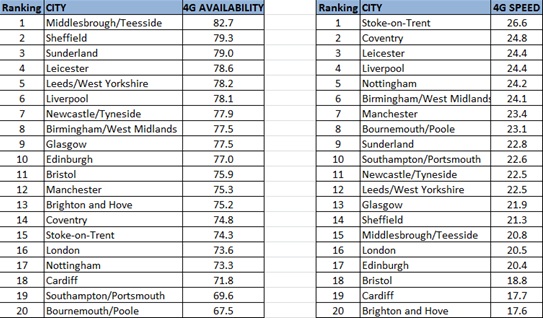 The research has led many to ponder whether 5G would fall into the same mixed-bag trap. Tom Redmayne, ?director of business development UK & Ireland at WiredScore, is a case in point. He said: “The NIC?research is damning, and now?we find London standing within the bottom five British cities. ?Even with the government outlining its£5G goals in?both the Industrial Strategy and UK Digital Strategy, after the inconsistent 4G roll out, it is crucial that a more strategic approach is taken. Recognising this issue, the EU has already made plans?to ensure roll out is smoother and up to standard. For example, European Commission president Jean-Claude Juncker proposed that?EU telecoms?be given ‘more stringent requirements’. “This will be crucial in ensuring that not just select pockets of users will benefit from 5G. In the end, the EU has demonstrated itself as the global leader in 5G regulation and development. The challenge for the UK post-Brexit will be in making sure it can align itself with the Commission’s regulations even if we are no longer sat at the table.
This article is part of our Real Business Broadband campaign, which seeks to provide a mouthpiece for business leaders to vocalise the broadband issues preventing their businesses from reaching full potential. We d love to hear your take on the debate and where you think the UK needs to make drastic changes and feel to ask us your broadband queries. Get in touch via email (shane.schutte@realbusiness.co.uk) or join in on the action using #rbBroadband.
Image: Shutterstock
By Shan” Schutte