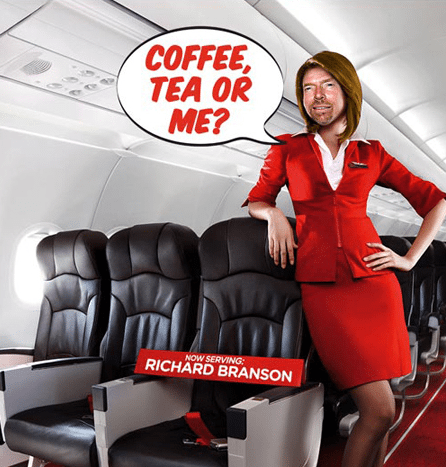 Virgin founder Richard Branson lost a bet to AirAsia founder and CEO Datuk Seri Tony Fernandes that will see him get his legs shaved, and have him cross-dress into a female flight attendant’s outfit for a flight to Kuala Lumpur.

The two entrepreneurs wagered their new Formula One racing teams Virgin and Lotus would finish ahead of each other in last year’s season. Branson lost the bet. While both Virgin’s and Lotus’s teams ended their debut Formula One seasons with zero points, Lotus managed to pip Virgin on better finishes. As a result, Richard Branson will take part on a charity flight on May 1, where he will wear AirAsia’s trademark red female flight attendant uniform, including high heels and make-up. The flight takes place onthe May 1st Air Asia London to Kuala Lumpur flight. Tickets start at £4,500 per person. Tickets for the flight are on sale now, with all proceeds from seat sales going to charity. There is also the opportunity to bid for a charity auction, where the winner will have the “opportunity” to shave Richard Branson’s legs at Stansted airport, before the flight leaves for Malaysia. “As an AirAsia flight attendant, Richard will have to comply with our grooming standards, and that includes shaving his legs,” says?Datuk Seri Tony Fernandes. ?Richard and I thought we could have a bit of fun, engage with our guests and raise more money for charity, if we opened up the opportunity to the highest bidder. It’s the first time we have both agreed on anything so that in itself is worth the price of the opening bid.”