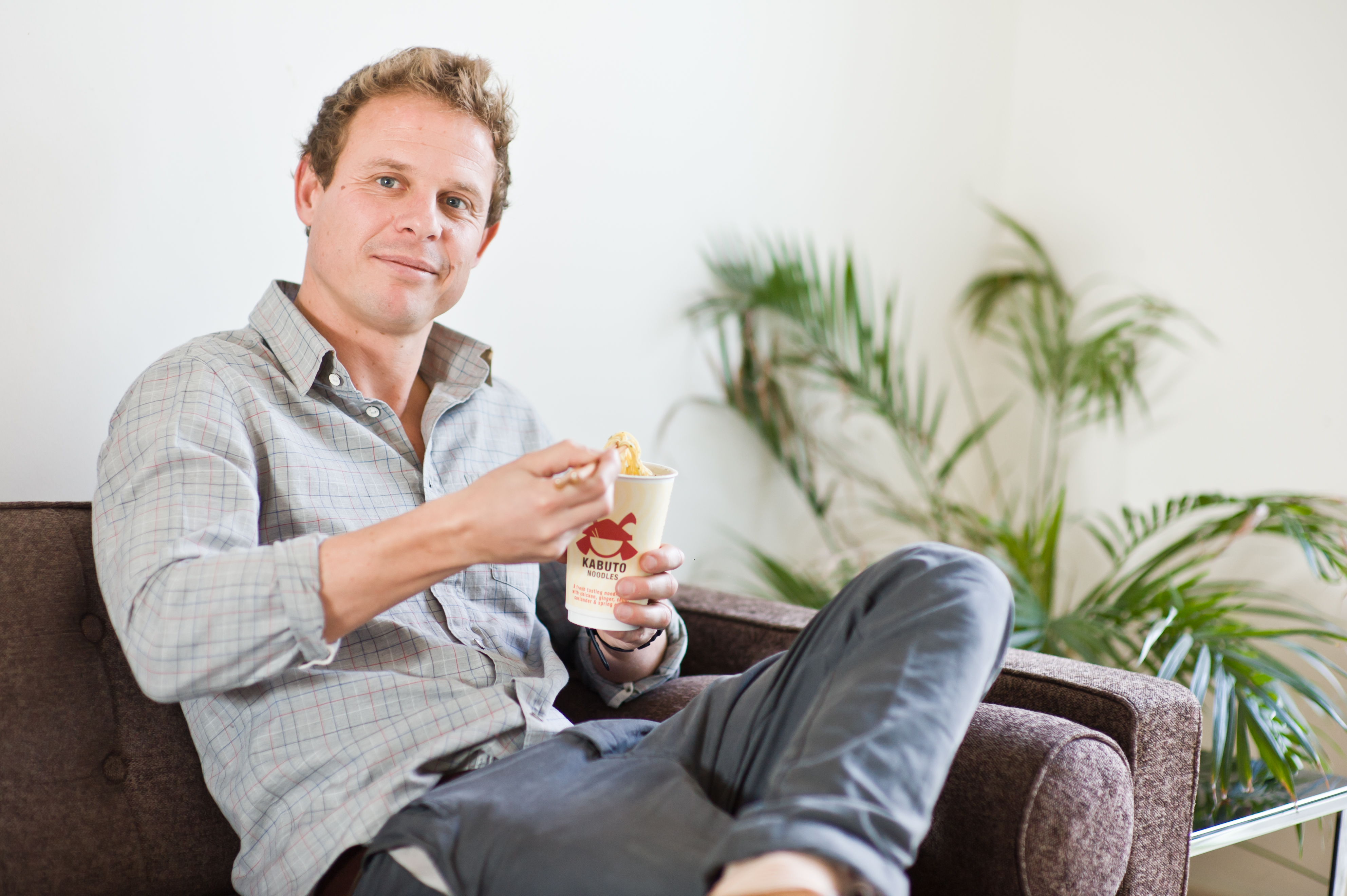 Working in sales for the successful food company Pieminister was key in creating the entrepreneurial spark that inspired Crispin Busk to launch Kabuto, a new range of upmarket Pot Noodle-style snacks which are now stocked in 1500 stores including three major supermarkets.

One of the things I liked about Pieminister is that it was a posh version of-,” Crispin says. “What you’re doing then is you’re selling something good. you’re not sort of selling ultra-cheap cat food or something like that where the only thing you can say about it is: Its cheap. You can say it’s got lovely flavours and good this, good that it’s something which people like. Inspired by the likes of Innocent Smoothies, Tyrells crisps and Ella’s Kitchen baby food, Busk wracked his brain and scoured supermarkets in search of a food product ripe for disruption. Initially he considered launching a luxury tea brand but doing research he found that it was a saturated market. But then he noticed the disconnect between the quality of cooked noodles found in places like Wagamama and the instant noodles available in supermarkets. That’s why in 2011 he launched Kabuto, noodle pots which contain no additives or preservatives and have a focus on quality ingredients, but can still be prepared using just a kettle. Tapping up old contacts he managed to get a foothold in independent stores, and eventually scored lucky with a contract to supply Harvey Nicks. “When you’re getting a company off the ground you kind of just have to get out there and sell it.,” he says. Youve got to get on it, phone people up and you get knocked back by some people. There are some people who you just think should buy it and you’re like ‘Why didnt they buy it !’. And then there are some people who are really good and pro-active about talking to youAnd stuff like that – Harvey Nicks had a really proactive buyer who just kind of got where we were coming from. It is the job of a good buyer to look for good things. Crispin says that the when approaching a buyer it’s key to research the nature of their products, think about the price point they will be looking to sell at and remember that you’re dealing with a human so try to build a human relationship. I remember such a relief the first time somebody ordered. And then actually the first time someone reordered, because it meant that the public were buying them,” he says. The traction generated by gaining a foothold in Harvey Nicks helped Crispin get Kabuto into Waitrose, Sainsbury’s and recentlyy Tesco. Turnover has grown from 100,000 in year one to 1.5m in year three. Working with supermarkets is a mixed blessing what they take from you by negotiating a low cost they return in the form of security and national reach. They drive a hard bargain on price but at least you know they arent going to go bust,” Crispin says. Despite having this national reach and ever-growing turnover, Kabuto surprisingly has just three employees. Crispin has achieved this feat by outsourcing not just manufacturing but alsopacking and distribution. He says: Technology has made outsourcing so much more realistic. Now you can coordinate people or teams in lots of different places quickly and efficiently. With just a mobile phone or a laptop you can organise a whole business. Similar: Jealous Sweets: How to get your product into Harrods